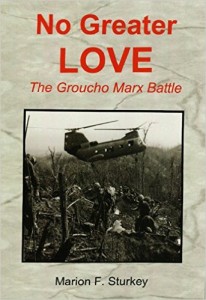 On Thursday, April 28th at 6:30 pm, local author Marion Sturkey will talk about his new book at the McCormick County Library. Sturkey’s book, titled No Greater Love: The Groucho Marx Battle,  tells the true story of a U.S. Marine Corps reconnaissance team and an infantry platoon that became stranded on a tiny jungle knoll during the Vietnam War. Surrounded and outnumbered over ten-to-one, the young men’s struggle to survive exemplified the warrior ethos of the Marine Corps. The presentation is free, and books will be available for purchase and signing by the author. Light refreshments will be provided by the Friends of the Library.

Marion Sturkey served as a military pilot in the U.S. Marine Corps. In 1966 and 1967 he flew combat-assault helicopters during the war in Vietnam. After leaving active duty he became a commercial pilot for the oil and gas industry in Texas and Louisiana. Marion later left flying behind and held managerial positions at AT&T for 25 years. During that period he served as a guest instructor at Bell Communications Research in Illinois and New Jersey. After retiring from the corporate world he began researching and writing technical books about military concerns, aviation issues, and regional history. To date he has authored and published 13 books. Marion lives in Plum Branch, his original hometown.