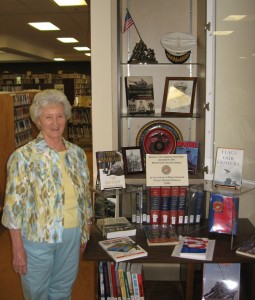 The McCormick County Library now has available a group of military books, primarily related to WWII with a focus on the South Pacific.  These books will be located in the Bobby F. Edmonds South Carolina and Local History Room.

The family of Major General Robert Randell Fairburn, USMC (deceased) donated the books he collected during his lifetime.

No single chapter, no single book could describe the battles fought and won by the U.S. Marines in the Pacific Theater of World War II. To tell the stories, one would have to tell the individual story of every man who participated in the bitter fighting. The story of Ran Fairburn, then a young Marine officer, deserves to be told and celebrated by all Americans. His memoir is included in the collection.

General Fairburn’s widow, Jane Stephenson Fairburn of McCormick;  his daughter Kathleen Fairburn Armstrong of Hendersonville, NC; his son James R. Fairburn of Philadelphia, PA and his daughter Sarah Fairburn Pannill of Atlanta, GA  gave the books with the hope that they will be the cornerstone of a larger collection.  They hope that others will also contribute military related books and that the McCormick Library will become a center for research related to military history.

The collection will be on display in the lobby of the library through June. Individual titles are available for checkout.