The McCormick Friends of the Library invite you to Author’s Night 2014 on Thursday, September 11th at 6:30 pm. Local author Ed Devos will talk about his new book, The Chaplain’s Cross. This inspirational historical novel honors the chaplains and the men who served in the US Army Air Corps in World War II. The story follows two men—one an army air corps chaplain and the other a Japanese fighter pilot. Each man faces a crisis in conscience in his own way, leading to a surprise ending that has implications for us today.

Ed DeVos is a retired US Army Infantry officer with over 20 years of active duty service in Vietnam, Germany, and other locations in the United States and overseas. He is a distinguished graduate of the US Army Command and General Staff College where he received his Master’s Degree in Military Arts and Science with an emphasis on military history.

The free event will be held at the McCormick County Library. Refreshments served. 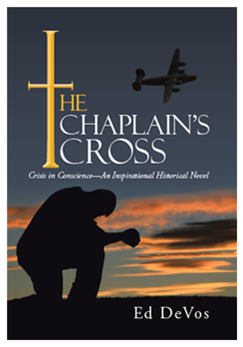