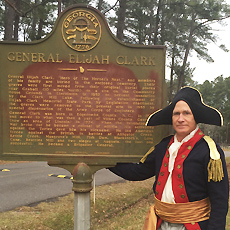 The public is invited to the McCormick County Library on Thursday, January 19th for a fascinating program on Elijah Clarke, one of the few heroes of the Revolutionary War from Georgia. He led the Rebels through the Hornet’s Nest Battle (also known as the Battle of Kettle Creek in Georgia). Dr. John Turrentine will present himself as Elijah Clarke to talk about his life, including the battle that made him famous, and how the Revolutionary War was won in the South.
Dr. Turrentine is a physician, teacher, writer, minister, pilot, and scuba instructor. He received his M.D. from the Medical College of Georgia and is a practicing surgeon and an Ob/Gyn. He also received a Doctor of Ministry and a Ph.D. in history from Trinity College in Indiana.
Light refreshments will be served. The free presentation starts at 6:30 pm in the meeting room of the McCormick County Library.